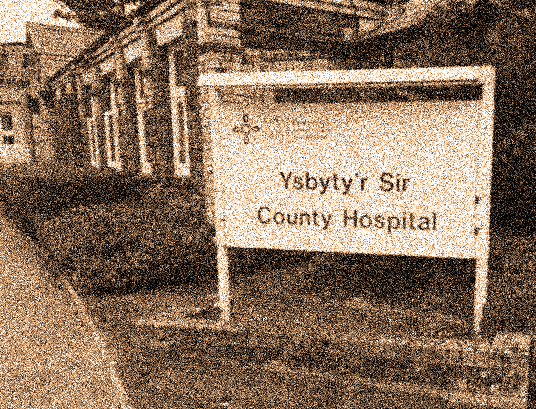 The County Hospital (Welsh: Ysbyty’r Sir) is a community hospital in GRIFFITHSTOWN in the county borough of TORFAEN WALES It is often referred to locally as Panteg Hospital. It is managed by the Aneurin Bevan Health Board. The hospital has its origins in the Pontypool Union Workhouse and Infirmary established in 1837. A new infirmary was built to the north of the workhouse in 1895. It subsequently became known as Panteg County Hospital.  As it was built on Coedygric Road, Griffithstown, it isn’t surprising that it became known as Coedygric Institute.

It became Panteg Hospital after World War II and had one of the best maternity sections in Wales. Immediately below the hospital is Coed-y-Gric Farm which is one of the oldest buildings in Wales.

Talygarn provides mental health services for residents of the Torfaen borough. The service comprises of an inpatient ward, which provides 22 beds for adults aged 16 to 65 who are suffering from an acute mental illness, and a Day Hospital which provides a service for 25 adults. The Day Hospital offers a range therapies and interventions for people suffering from an acute mental illness, provided by both nurses and occupational therapists.
Talygarn provides the out of hour’s assessment unit for Aneurin Bevan
University Health Board. This operates between the hours of:
2400=0700 Monday to Thursday
2400 onFriday=0700 Monday
This means that individuals who require a mental health assessment
between the hours stated above attend Talygarn ward to see the on call
doctor. This process can often lead to an individual requiring an
admission. If the individual has been admitted but resides in another
postal area they will be transferred to the relevant ward in the morning following their admission.